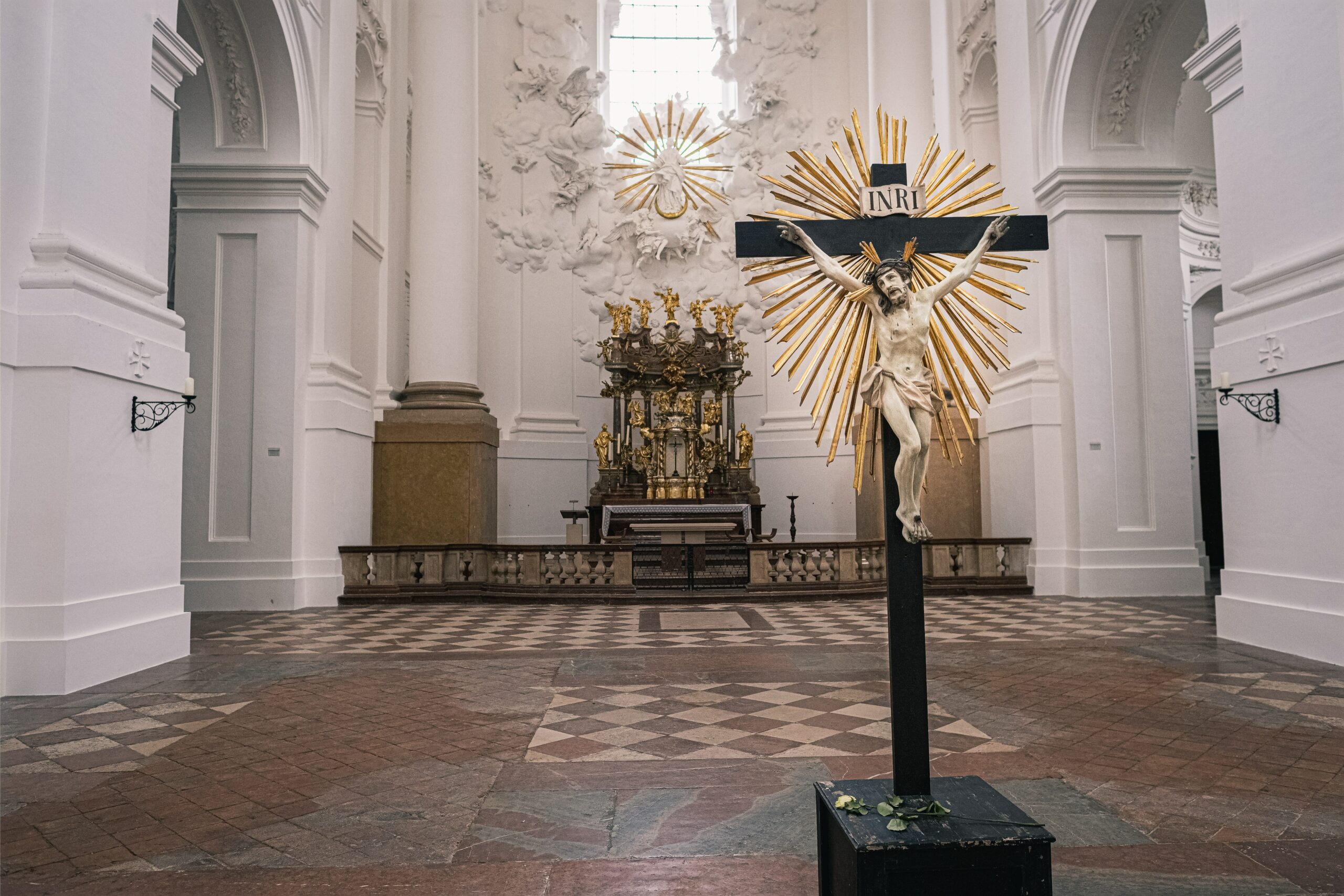 The great Eastern Father, Gregory Nazianzus, wrote, “We must begin by purifying ourselves; we must be instructed to be able to instruct, become light to illuminate, draw close to God to bring him close to others, be sanctified to sanctify, led by the hand and counsel prudently.” John Paul II has echoed Nazianzus’ insight in his conceptual division of priestly formation into four main areas of focus in Chapter 5 of Pastores Dabo Vobis.

“Purifying ourselves before purifying others.”

Every priest is called to be the “living image” of Jesus, and therefore “should seek to reflect in himself, as far as possible, the human perfection which shines forth in the incarnate Son of God. The priest should mold his human personality in such a way that it becomes a bridge and not an obstacle for others in their meeting with Jesus Christ” (Pastores Dabo Vobis, 43).

The human perfection of Christ does not make Him less fully human, but precisely more so. He is what God wills all of us to become. The priest becomes more human, not less, by striving for the full human maturity which shows itself in the natural virtues. Thus, the Holy Father writes, “Future priests should therefore cultivate a series of human qualities, not only out of proper and due growth and realization of one’s self, but also with a view to the ministry. These qualities are needed for them to be balanced people, strong and free, capable of bearing the weight of pastoral responsibilities. They need to be educated to love the truth, to be loyal, to respect every person, to have a sense of justice, to be true to their word, to be genuinely compassionate, to be men of integrity and, especially, to be balanced in judgment and behavior”(PDV, 43).

For the celibate priest, the “nuptial meaning of the body” is expressed by reserving physical sexual expression in the same way that Jesus did. Just as Christ offered Himself on the cross as a consummation of the marriage between Himself and the Church, it is by making of their bodies a spiritual sacrifice (Rm. 12:1) that priests wed themselves to the Bride of Christ. “The Church, as the spouse of Jesus Christ, wishes to be loved by the priest in the total and exclusive manner in which Jesus Christ her head and spouse loved her” (PDV, 29).

While grace can overcome any weakness, seminarians should strive for an understanding of self which neither discounts the importance of their God-given sexuality nor naively underestimates the demands of  a  celibate life. In  a  very real way,  the seminary is a period of  prenuptial preparation in which a man seeks, by the grace of God, to make himself the sort of man the Church wants and needs as her spouse.

Just as marriage requires free and willing consent, the gift of celibacy can only be received if it is freely and willingly embraced by the priest. Unfortunately, some people in recent decades have resented it, hoped it will be changed, or internalized it in a purely legalistic way. Yet without consent to the bride, the priestly life will never be as fruitful as it can be. This consent to the Church is expressed and consummated in each priest’s loving and generous availability to God’s people. As the Catechism so beautifully states, “Accepted with a joyous heart, celibacy radiantly proclaims the Reign of God” (CCC, 1579).

“Be sanctified to sanctify.”

A proper human formation leads to an openness to the possibility of sanctity. That possibility is realized through intimacy with God in the Trinity.

As the Holy Father teaches, Christ is the key to entry into that divine communion of love. “Those who take on the likeness of Christ the Priest by sacred ordination should form the habit of drawing close to him as friend in every detail of His life”(PDV, 45). Without daily prayer, a priest cannot meet  the  responsibilities of  his  vocation. This is true  for  Christians in  every vocation – but how much more so for the priest, who must serve as a kind of scout, guide and agent of hope for those who choose to tread the spiritual path cut by Christ, the pioneer and perfector of our faith (Heb 12:2).

The obligations of the priestly state include daily recitation of the Liturgy of the Hours, with and for the whole Church. Priests should, above all, seek to offer the Eucharist daily, since it is “[from] this unique sacrifice their whole priestly ministry draws its strength” (CCC, 1566). A regular recourse to the Sacrament of Reconciliation is also a requisite to any advancement in the spiritual life.

Seminarians should never think of these anchors of the priestly life as burdens from which one might need a break or respite. They are not just things that a priest does, but integral to who the priest is. The priest cannot be just a man who prays; he must be a man of prayer, a man transformed by  constant prayer. The  life  of  prayer must  also  include daily  reading of  and reflection on the Sacred Scriptures, the Word of God. Without a deep familiarity with the “plan of the mystery” revealed in Christ (Eph. 3:9), a priest cannot disclose that mystery to others.

Of course, celebration of the Eucharist, recitation of the Liturgy of the Hours and the reading of Sacred Scripture form the solid foundation for meditative prayer. This, too, needs to be a daily part of the life of a priest. Many use the rosary as a springboard for deeper meditation. This staple of Catholic piety deserves a primary place in the daily regimen of priests.

A few words should also be said about what used to be called “mortification.” Fasting and other forms of self-discipline are essentially a form of practice in self-giving. If we are constantly allowing ourselves the many luxuries which the modern world places before us, we will not be ready to sacrifice ourselves for the sake of those we ought to love: God and neighbor. Little, quiet gifts of self to God in the form of small sacrifices go a very long way toward reorienting us away from an addictive concern with the consumption of things toward a loving availability to God and neighbor.

Prayer and fasting, along with constant dedication to the service of God’s people, teach priests to draw close to Christ as a friend in every detail of their lives.

“Draw close to God to bring Him close to others. Lead by the hand and counsel prudently.”

As John Paul II writes, “The whole training of [seminary] students should have as its object to make them shepherds of souls after the example of our Lord Jesus Christ, teacher, priest and shepherd” (PDV, 57, quoting the Second Vatican Council’s Optatam Totius, 4). The formation of the candidate for ordination must aim at inculcating a pastoral charity that will enable the priest to be the “living image of Christ” he is called to be. To image Christ—the Good Shepherd and Spouse of the Church—the seminarian’s formation must have a specifically pastoral orientation. It is not enough that one be emotionally, spiritually and intellectually mature. All these attributes have to be placed at the service of others in the priesthood.

Thus, add-on “ministry” courses are not enough in the pastoral formation of young men for the priesthood. Pastoral formation requires that the seminarian be able to integrate what he has learned through study with what he has learned by experience. Every moment of the process of growth in the seminary should make reference to the pastoral setting. In addition to specific classes in areas such as pastoral counseling, parish management and homiletics, we will rely heavily on our pastors and people in this process of introducing and preparing men for work in parochial ministry. It is the seminary’s sincere hope that placement with the pastors of the Archdiocese of Denver and with the people in the parishes of northern Colorado will be real occasions for growth for our seminarians. In these places, above all, they will learn how to love the Bride of Christ as she needs to be loved: as Christ Himself loves her.

“We must be instructed to be able to instruct, become light to illuminate.”

One of the greatest challenges faced in opening any new seminary is the design of a sufficiently strong academic program. The Church supplies specific guidelines for seminary studies. These stress that intellectual formation is not a thing apart from human, spiritual, or pastoral formation. The desire to know is, after all, a central part of being human. Seminary study aims at an ever deeper  understanding  of  the  mysteries  expressed  in  the  spiritual  life;  and  it  prepares  the seminarian to offer the pastoral guidance to those who need to find in those same mysteries the meaning of their joys and sorrows.

Like good stewards of the Kingdom, we intend to draw out both the old and the new to present to our seminarians. They will be exposed to the masters of intellectual history in the areas of philosophy and theology as well as practical pastoral training that will result in the “unified, internally coherent curriculum” that the Church calls for in seminaries (United States Conference of  Catholic Bishops, Program  of  Priestly  Formation,  351).  Of  course, that must include an approach to theology which is “comprehensive and extensive, covering the range of Christian doctrine” (PPF, 339). And, in keeping with the declaration of the Second Vatican Council that “the ‘study of the sacred page’ should be the very soul of theology” (Dei Verbum, 24 and cf. Sapientia Christiana, Art 67.1), we seek to make the Scriptures the very foundation of the curriculum.

The components of seminary life include classes, liturgies, service in parishes and service to the poor, as well as time set aside for personal prayer. It is vital that all these elements contribute to a unified vision of the gospel message in all its beauty. By this means “a purely abstract approach to knowledge is overcome in favor of that intelligence of heart which knows how to ‘look beyond’, and then is in a position to communicate the mystery of God to the people” (PDV, 51).